Whether for installation in a bar, restaurant or for your home, the shuffleboard is a fun and original activity to play with family and friends. We suggest you create your custom-made shuffleboard table. Design, contemporary or classic, you can choose the smallest details of your game. Indeed, after choosing the style, you can select the colors of the structure, the playing surface or even the pucks.

With a minimum height of 2.80 meters (9.2 ft), the shuffleboard table can measure up to 7 meters (22 ft). Toulet offers 4 styles of shuffleboard: modern, designer, industrial and classic. Each shuffleboard is made to measure according to the selected customization. Dimensions, aesthetics, colors or wood stain, each element of the table is customizable. The materials are carefully selected for a Made in France shuffleboard table that is as pleasant to use as it is to admire. Designing your own shuffleboard table is child’s play.

For a harmony in the game space, pool tables and shuffleboard are created in harmony. Selection of wood, colors, our team makes the shuffleboard table and the billiard table in the same materials and finishes for a perfect coordination. 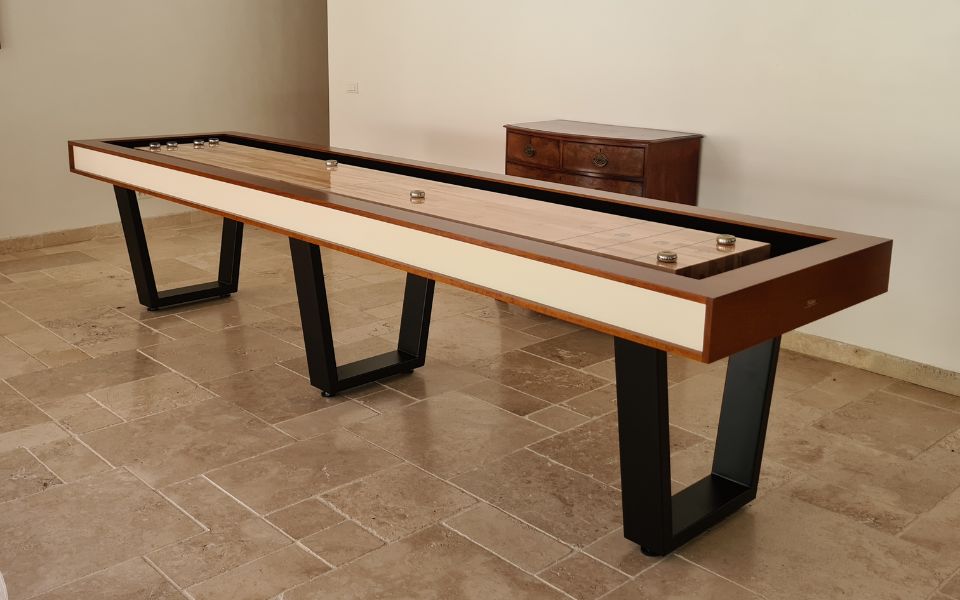 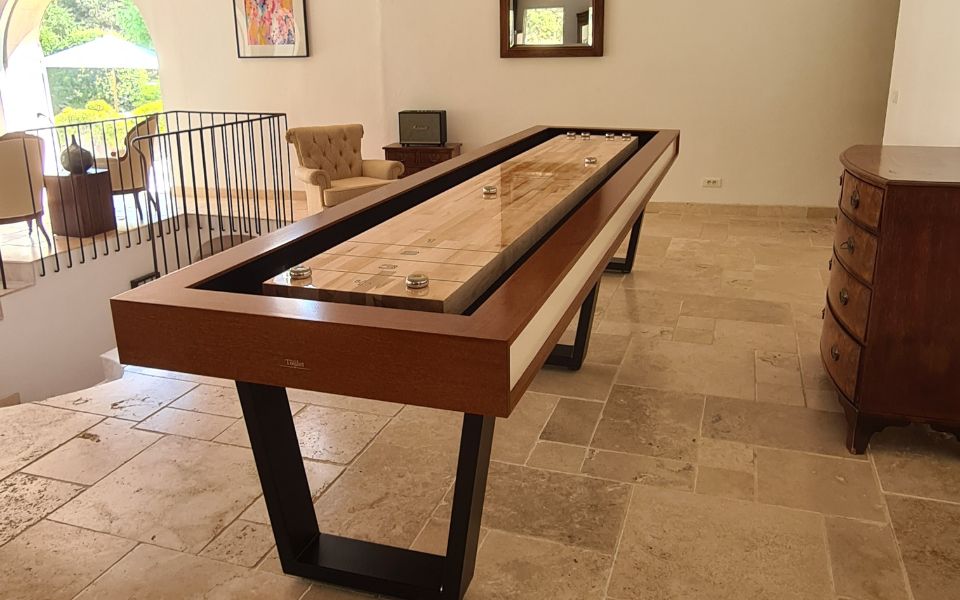 A perfect combination of raw materials. 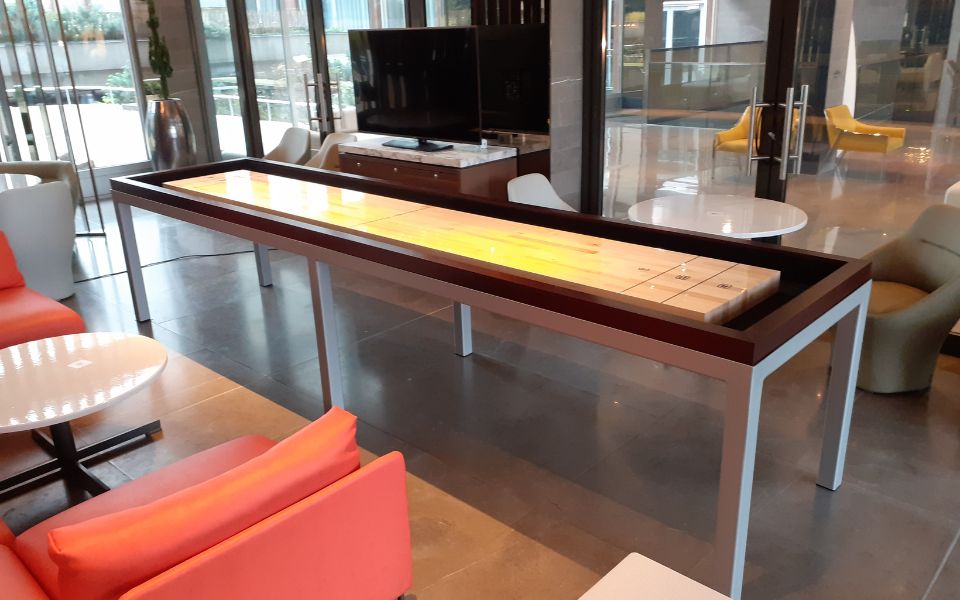 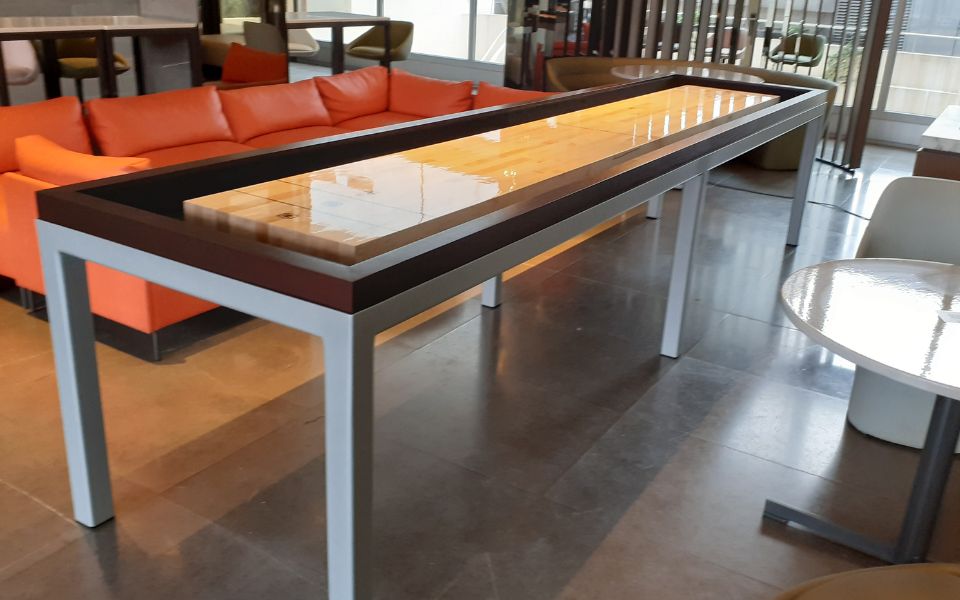 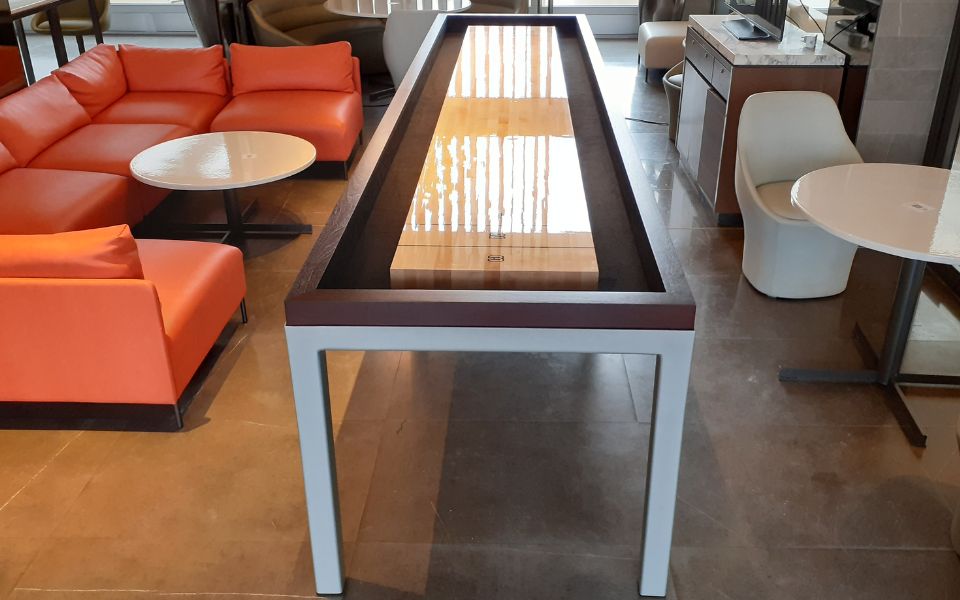 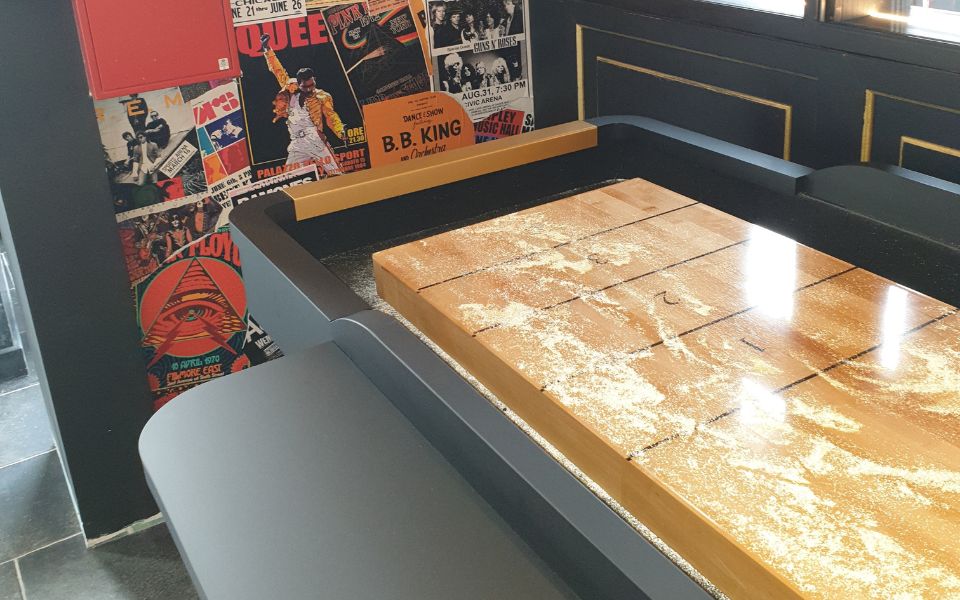 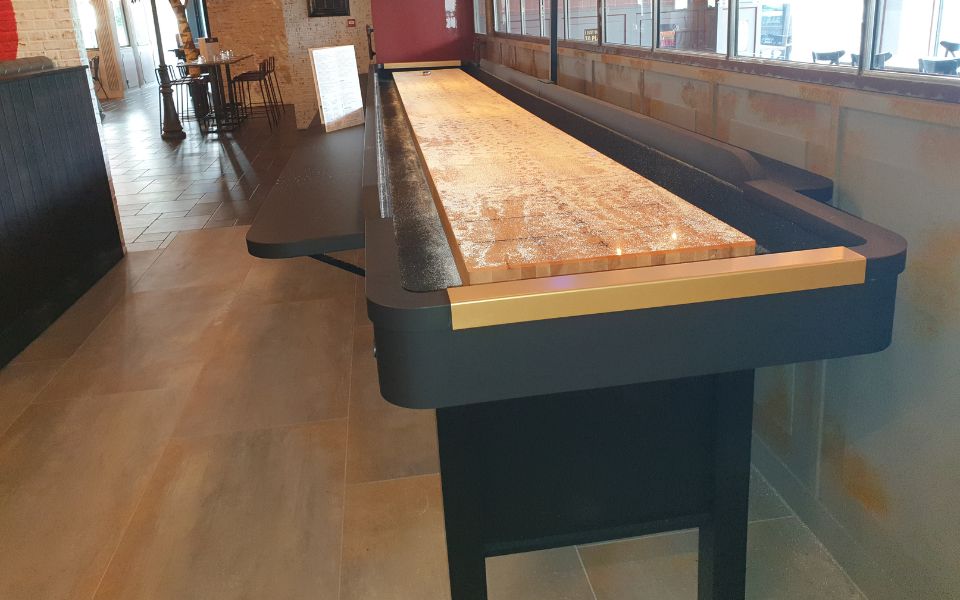 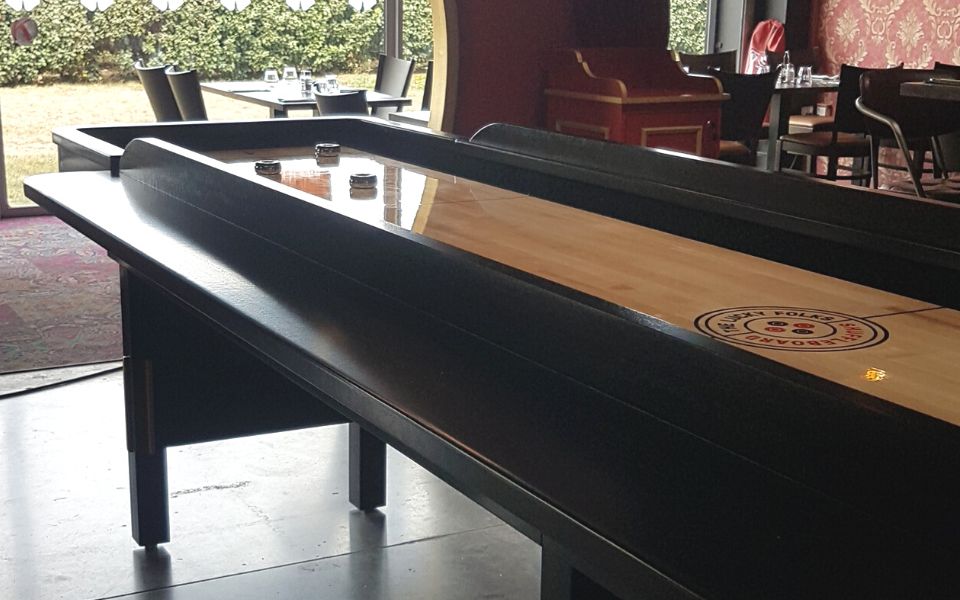 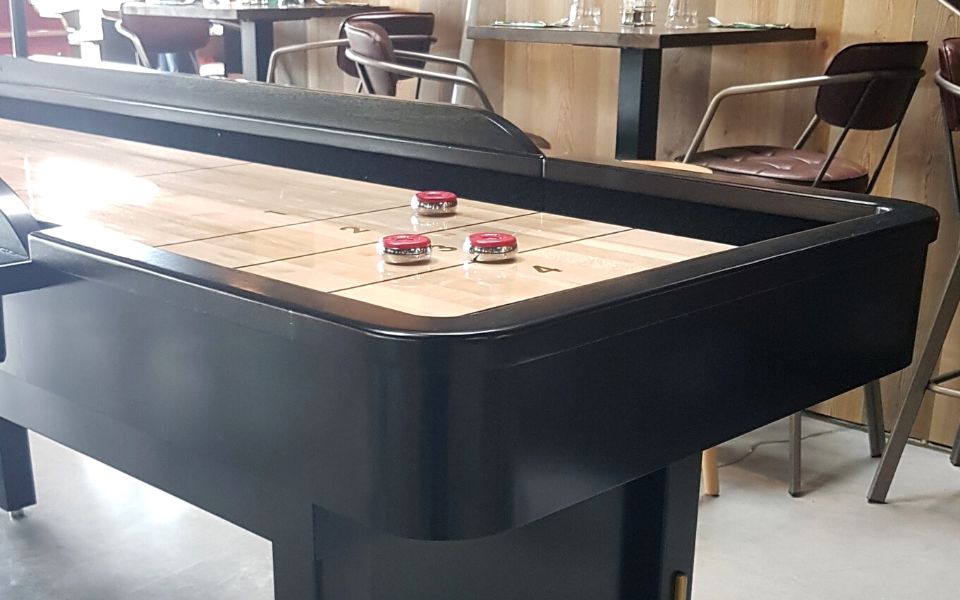 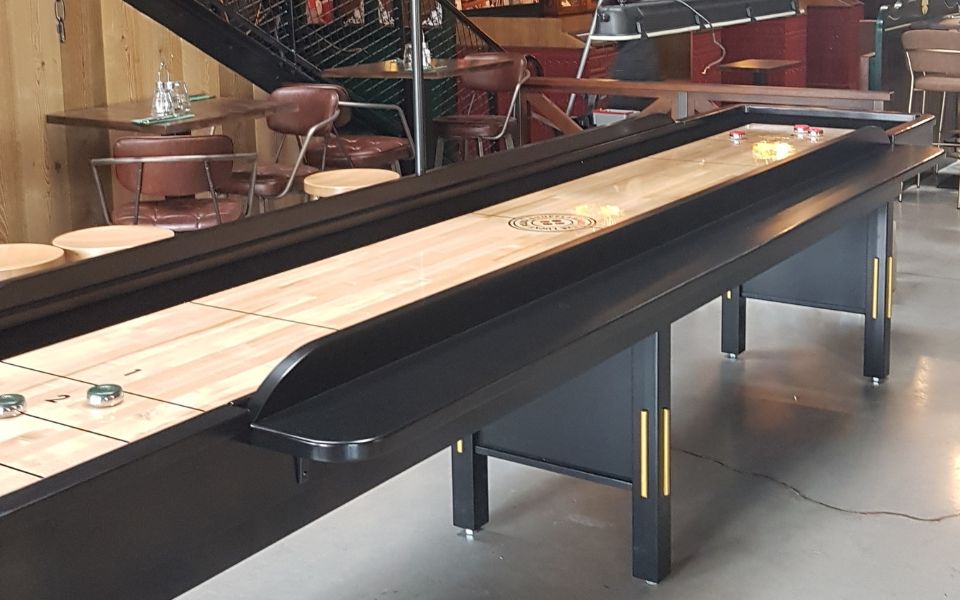 A very popular model for hotels, bars and restaurants. 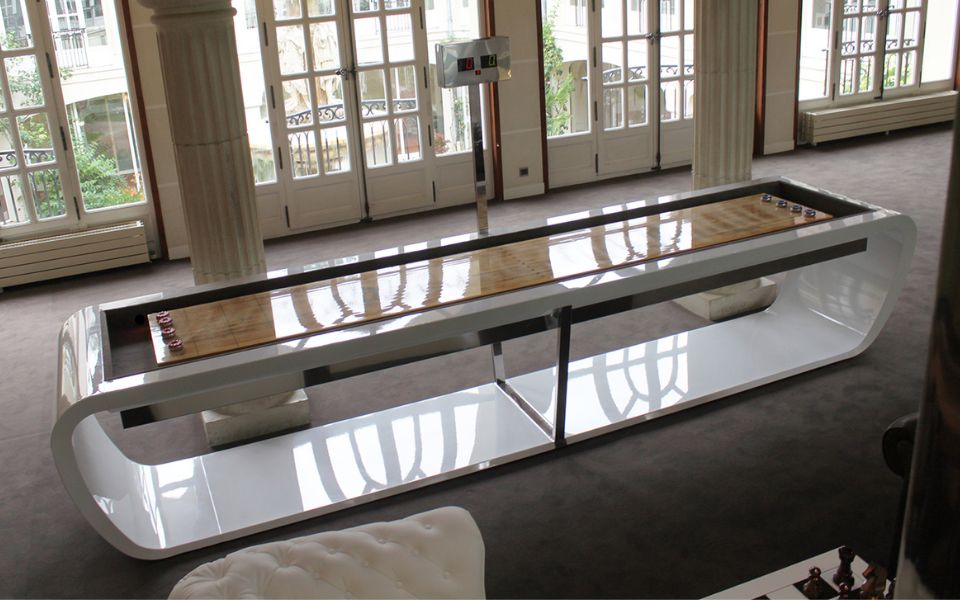 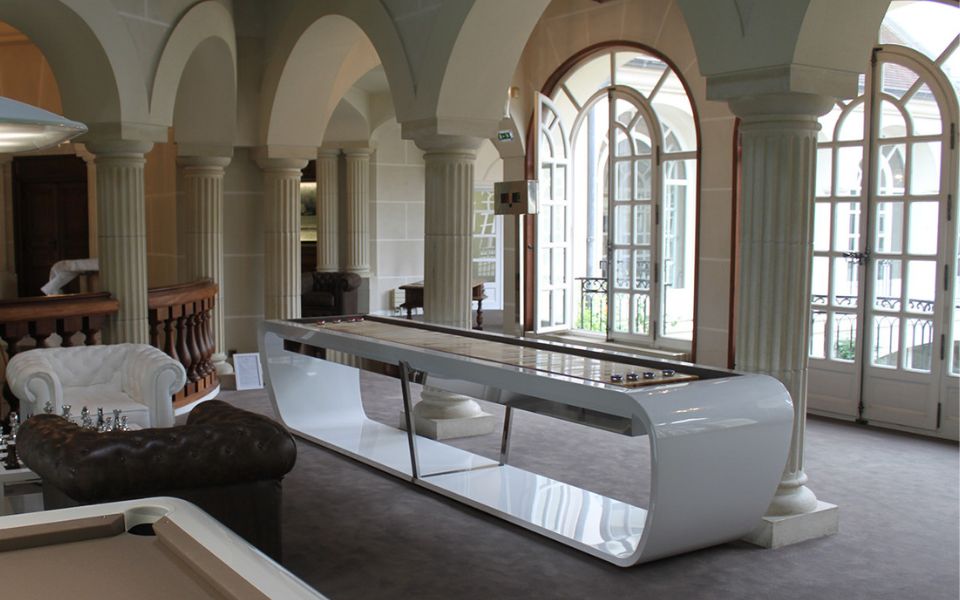 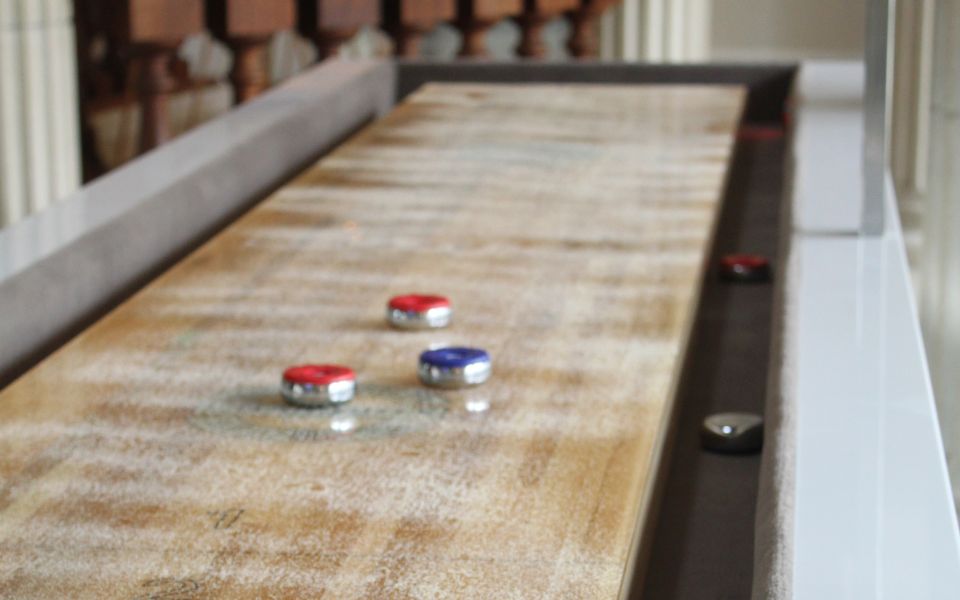 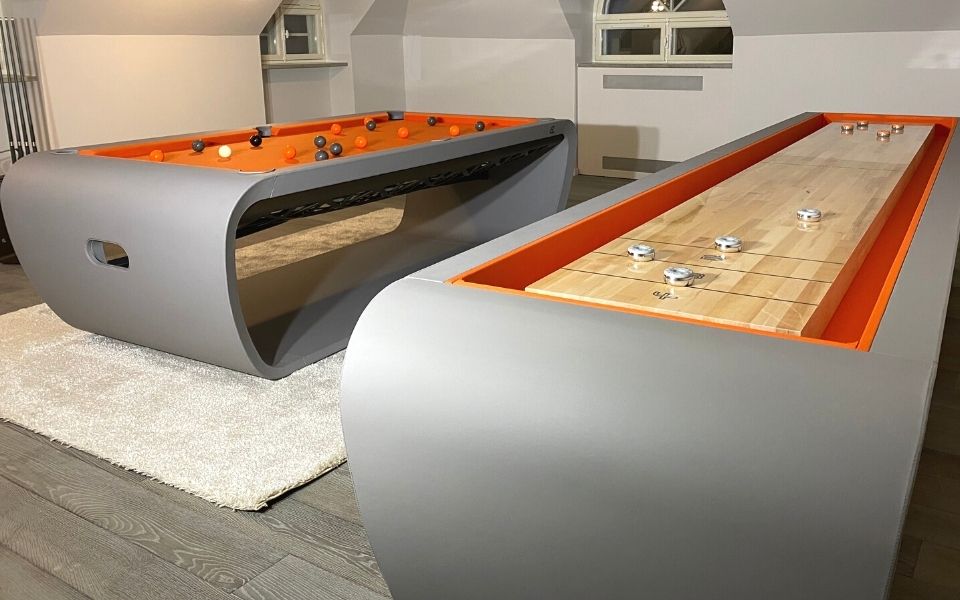 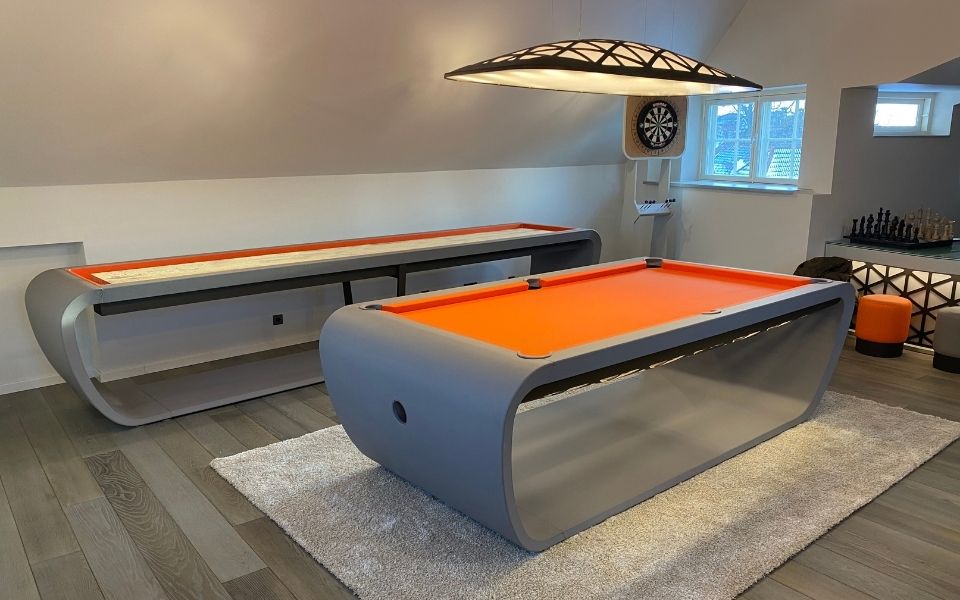 For any price request and customization, contact us directly. We can make all styles of shuffleboard, from design to modern and classic. You have a custom project to realize? Our team is at your disposal to answer all your questions. Contact us by email or by phone at +33 3 20 46 25 54.

What is the origin of the shuffleboard ?

First appearing in the 1500s in taverns in Britain, the shuffleboard also known as the shuffleboard was very popular. Its original name was “Shove a penny” which means “Push a penny,” because that was the gist of the game. Players had to shoot coins with the objective of getting as close to the edge as possible without the coin falling. The game was popular far beyond the bars. Indeed, members of the aristocracy had shuffleboard tables made for their homes. Considered a game of chance, it was banned by King Henry VIII.

The game arrived in the United States in the 1900s with a rise in popularity around the 1950s following World War II. The soldiers played there a lot. Interest in this game began to decline from the 1970s with the arrival of new activities such as television. However, players from all over the world still come together for top level competitions.

What are the rules of the game?

Here are the most common rules for shuffleboard, which is played by two players. The rules generally require you to slide all 4 pucks against your opponent’s pucks by hand. Try to reach the highest scoring area of the shuffleboard without falling over the sides.

To win points, the pucks must be farthest from the board. Some of the strategy and fun really comes into play when you knock your opponents’ pucks off the board, outrun them, or use your weighted pucks to protect the other weights with the most points.

The most common games are usually played to 15 or 21 points. It’s up to you! 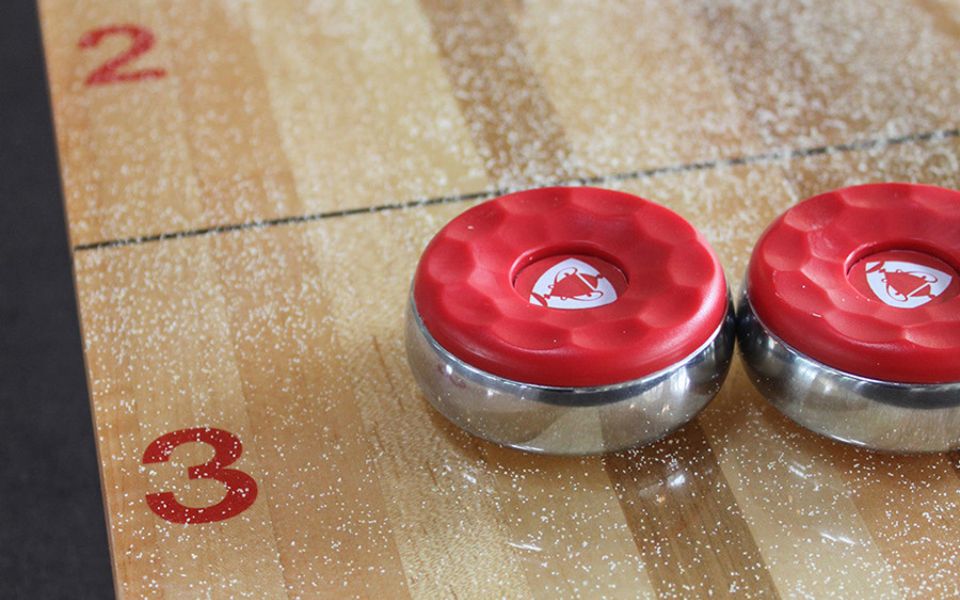