THE BIRTHPLACE OF BILLIARDS

Billiards history begins during the reign of Louis XI of France, with the arrival of cloth-covered tables on which balls were pushed using curved sticks. A distant relative of modern billiards and golf.

Some time later, Louis XIII declared the end of the Regency, at the Louvre, by climbing on a billiard table.

Engravings show Louis XIV playing on a billiard table, and Pascal quoted the king in his “Thoughts,” saying billiards was reserved for the nobility. 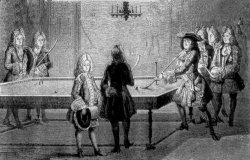 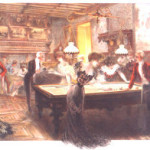 Before the French Revolution, VIVANT DENON wrote, numerous billiard rooms existed in Paris, “halls” that were crowded day and night with players and onlookers, masters and amateurs.
The rules were different from today’s, and the game mixed chance with strategy. The goal was to send balls into pockets set into the table’s borders.

At the beginning of the nineteenth century, billiards was so popular that every respected establishment had to own several of them.

Prisons were not an exception to the rule and MINGAUD, a non-commissioned officer serving the Emperor, took advantage of his incarceration to devote himself to this sport.
He improved the sport by fixing a piece of leather to the tip of the wooden cue. This allowed him to improve his control over the ball’s direction.
He also had the genius idea to rub the cue tip on the prison’s wall, which was whitewashed. The result was incredible — the player managed to impart spin on the ball.

The resulting curves seemed like magic.
The screw back stroke, or draw shot, was born.
Lateral strikes on the ball caused surprising bounces when the ball touched the rubber cushions. 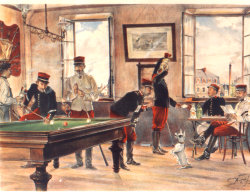 When he was discharged, MINGAUD begged his jailer to allow him to extend his stay to improve his technique and sharpen his skills.
The jailer granted the requests of his inmate – who was also his playing partner.
After his release, he challenged the capital’s billiard teachers, whom he defeated one after another.
He printed the first treatise on billiards, in which he explained the techniques used to cause different effects.

From that time on, numerous works have been published as the game has been improved upon.
Mingaud’s invention was significant, and the game developed within society.
The famous mathematician CORIOLIS took an interest in it.
He formulated equations describing the complex phenomena involved, in his book titled La théorie mathématique des effets de jeu du billard (“Mathematical theory of the game of billiards”).

In 1850, new rules were implemented. They favored spin effects and directing the ball, and pockets were eliminated. Carom billiards expended rapidly in France.

History of Billiards Toulet : The rules are as easy as the game is fascinating. Louis TOULET’s furniture factory, near Lille, launched a billiard table division.

The quality of its products was so good that the company rapidly became the market leader.
Its tables were preferred by billiard halls, including the famous hall Salle RAMEAU in Lyon.
The billiard hall was one of the public places where players came to play a round, and others trained. Passersby stopped to enjoy the show. 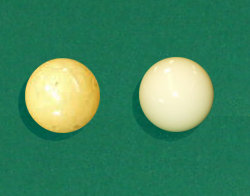 During the American Civil War, the blockade imposed on the Confederacy made it impossible to import the ivory from which balls were made.

Two industrialists, passionate about billiards, decided to give an award to the person who found the best substitute for ivory.
While looking for a solution, the HYATT brothers discovered the celluloid that made their fortune, but did not solve the original problem.

The movie industry took advantage of this celluloid, though, to produce film. After a century of searching, a new material was created: phenolic resin. It is able to resist to hundreds of successive impacts without being damaged. 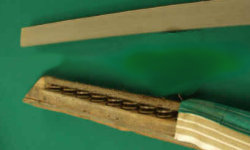 At the end of the nineteenth century, following a process error, the American inventor GOODYEAR discovered the secret to vulcanization — to the benefit of pool players, to whom he targeted his second invention.
Cushions were previously made of hay or spring-loaded.

In the twentieth century, cushions began to be made of rubber.
The returned energy was considerably improved, and the trajectory elongated. The three-cushions billiard game was launched.

In 1880, billiards was a game, a sport, and a show as well.
The best player in Paris, VIGNAUX, faced the best American player, SLOSSON, playing straight-rail carom billiards (the “free game”) on a TOULET billiard table before thousands of spectators, including French President Jules GREVY. SLOSSON posted a run of 1,103 consecutive points.
The balls seemed to be magnetic, never drifting more than a few inches from each other.
The audience could not believe their eyes.
They watched, uncomprehending, as VIGNAUX was ripped apart.

But after watching his opponent’s performance, VIGNAUX was able to deconstruct the mechanics, and it only took him a night to master the new method.

The following day, he posted a run of 1,531 points and won the match.

New games (cushion carom and balkline) were created to decide between players who lined up long runs and ruined the show.
Rules banned players from making multiple caroms in the same area. 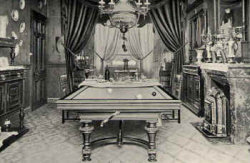 At the end of the nineteenth century, billiards reached its peak.
It was appreciated as a game and a show, and billiard halls became meeting places.
Billiard tables had their own space in the many cafés (1 for 50 inhabitants).
Each village café had its own billiard table, team, and champion.
There was no professional association that existed without a circle, a billiard table, and internal competitions.

Competitions took place within each corporation.
One was for the medical profession only, another for firefighters, and so on. Press articles showed that the best players sometimes neglected their jobs to improve their billiard techniques. 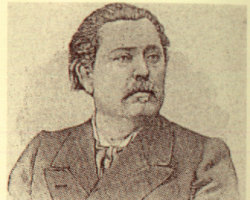 History of Billiards Toulet : In 1910, playing on a TOULET billiard table, VIGNAUD achieved his record of 325 points in a two-shot frame, but the players’ dexterity had started boring the audience.
The “three-cushions” game was devised to decide between the most talented competitors, and it attracted many non-professionals.
The ball had to hit three cushions before caroming off the second ball.

Billiard table manufacturing started to include a heating system, in order to completely dry the cloth and allow balls to slide better.
Thinner cloths were produced to increase sliding, as well.
The company moved in the right direction, and new means of transportation took players away from billiard rooms.

The passion for the “little queen,” or three-cushion table, eclipsed the draw of meeting rooms, friendly places and billiard halls.

In the 1950s, billiard tables were so successful that new techniques allowed the manufacture of more accurate and reliable ones. 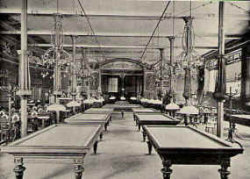 The company’s standards of manufacturing were adopted by all manufacturers for production of competition tables.
A substitute material replaced ivory for billiard balls. The “ivory sorcerers,” those who were particularly good at compensating for egg-shaped balls, were replaced by more accurate players.
New records were set on these new billiard tables, which rendered billiard tables from the early twentieth century obsolete.

During the 1970s, new ways of playing appeared in England. Billiard tables with pockets — more entertaining, less technical — attracted new players. They allowed the players to become more familiar with the implements of the game.

Billiard rooms were including in leisure complexes. Billiards was an option for spending relaxing nights with friends. With the 1990s came the return of the billiard tables in the homes of private individuals who placed high value on having fun with their families.